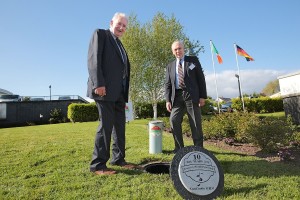 FEXCO and ConCardis formed the partnership in 2005 to provide Dynamic Currency Conversion (DCC) to ConCardis customers. A decade on, more than 10,000 ConCardis merchants in seven European countries now offer DCC as a direct result of the partnership.

The event, held on Tuesday May 12th in Killorglin, saw FEXCO and ConCardis coming together to mark this milestone by burying a time capsule in the grounds of FEXCO’s head office, where it will remain until 2025. This event is a true reflection of FEXCO’s strong partnership competencies and provides a great opportunity to gather together key executives from both organisations.

The event was attended by Simon Harris TD, Minister of State for the Department of Finance, as well as members from both FEXCO’s head office and ConCardis Frankfurt.

Denis McCarthy, CEO of FEXCO, comments: “It’s a real honour to be celebrating such an impressive milestone with our partners at ConCardis. This anniversary marks the dedication and hard work of both sides to deliver an unparalleled service to merchants across Europe